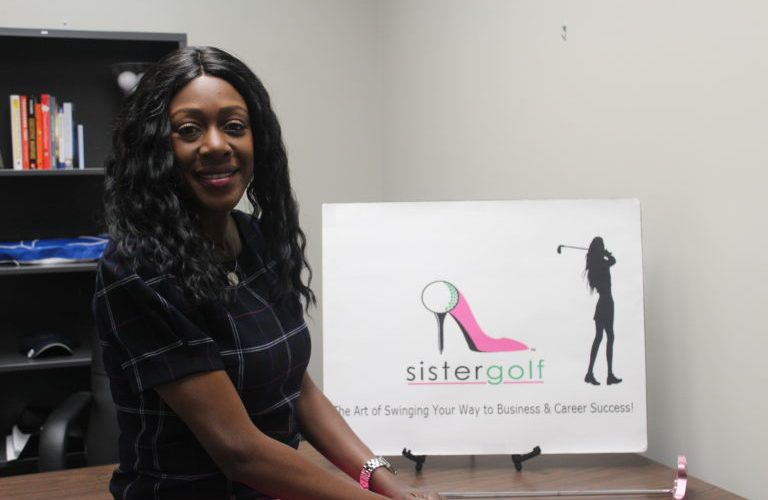 As a business banker in Florida in the early 2000s, she noticed that male co-workers would regularly secure $750,000 in monthly sales. When she asked how to improve her own performance, a fellow employee urged her to start playing golf.

“I was the only African-American on the course, so I stood out,” said Sylla. “People were curious about me and would come up to talk.”

As a result of signing up for and taking lessons, in a few short months she went from struggling to meet her monthly goal of $500,000 to being a repeat member of the company’s Million Dollar Club, a designation given to associates who exceeded $1 million in production in any given month.

Sylla saw very few, if any, women taking advantage of the business development and relationship building opportunities that golf offers. So, she created SisterGolf in the Birmingham area in 2013 to help women learn and leverage the game for business and career success.

“Knowing how to play, understanding how the game is played, just being able to engage in conversations around golf [is important] because it immediately is a point of commonality between you and the person you’re talking to,” she said. “As it relates to business, it’s an immediate connector that you have in common, and it opens the doors for you to be able to set the stage to present whatever your business proposition. …It sets you apart.”

Shortly after launching a series of workshops, clinics, and events designed to help women get in the game, Sylla began getting requests from male executives and professionals to provide a similar program for them. What began as a quest to empower women in the workplace expanded to include both male and female professionals interested in using golf as a tool for relationship building and professional engagement. Over the years, she has conducted workshops at several companies, including Alabama Power, Southern Company, the National Urban League, and others.

“Most people are ignorant about how powerful a tool [golf is], and they don’t have a mentor or anyone to show them the ropes about getting into it and how to use it,” Sylla said. “And then as a female you really don’t have any sort of guidance.”

Sylla’s guidance started when she found an instructor and began taking lessons.

“I didn’t expect that I would like it. I was really doing it as a way to help me in my career,” she said. “The surprise came when I actually ended up liking [golf]. It really paid off for me once I started telling people at work that I was taking lessons. The conversational doors opened up, and … it made people’s heads turn because that was so unexpected and so unlikely.”

Sylla, who studied economics at the University of London’s Queen Mary and Westfield College and earned her bachelor’s degree from the University of Miami, said women are often marginalized in business circles and frequently hurt themselves through timidity.

“We are not included but we often exclude ourselves. We are afraid and shy away from opportunities,” she said.